Posted on June 25, 2015 by Drivesa5
It’s been a while since the last wagon update, mostly because it did a lot of sitting over the winter. Things are moving forward quickly though, and it is now registered, inspected, and driving! It’s the polar opposite of my regular daily driver 2 door Sunbird: quiet, smooth, comfortable, and yes a little slow. However, the 85hp is nowhere near as bad as the old Fairmont was … it feels pretty torquey down low and will get up and go ok.

It failed inspection the first go around because of a glued together tail light (the previous owner broke it, and glued it back together, saying, “It was like a jigsaw puzzle!”) So all I could find on short notice was a tail light from a Sunbird wagon, which I had to modify the connectors to fit the bulbs, switch the location of the backup lamp, and the mounting holes are surprisingly a small amount off. I didn’t want to ruin the tail light so I just used one of the mounting holes. It passed fine, but looks kinda goofy with two mismatched tail lights. The originals seem to be impossible to find. On the way are a set of 80s Cavalier lights from eBay, hoping that they will be close and won’t need much or any modifications to fit, and then it’ll be matched up again, or at least much better.

I’ve been chipping away at some of its needs over the winter including hatch and tailgate struts, front suspension and brakes, some cleaning, air filter, new battery, rear shocks, coating some rusty areas, and more. It really runs great and doesn’t seem to need anything in the engine department. I also drew and cut out some black vinyl Skyhawk decals which I think came out pretty good. I put one inside at the back of each of the rear side windows and Skyhawk letters-only in front of the 3rd brake light. I’ve already done the obligatory fan switch, but no TCC or temp gauge yet (very soon.) I just flip the fan on once I’ve been driving a while and am stopped or at low speeds. The big thing it needs still are the rocker panels replaced, which I keep not getting around to, and am debating farming it out. Finally did find a pair of rockers, but they are a little short and I think I’ll need a third to patch together and get to where the big hole is/was. I believe I have someone lined up to do it, but they are not ready yet and I decided to throw a quick and very ugly fiberglass patch over the one big hole to get inspected and then it will be fixed for real soon (or sometime before next inspection anyway.) I also picked up some new wheels for it, which I’ll post once I find some tires and everything is all done, and make sure they fit ok and all that.

There’s still lots more to do to get it all really fixed up, but I’m definitely enjoying driving it; even as is, it’s a great cruiser. It needs some more body work, to get painted, intermittent speaker cutout fixed and/or new radio, wheels and tires, has no headliner (may leave that for quite a while,) weld up roof rack holes, rust preventative everywhere, and who knows what else. 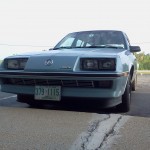 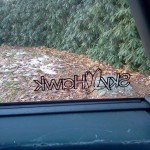 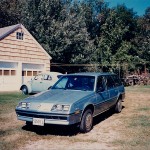 Photo from when it was new, found it in the glovebox.

This entry was posted in 1986 Buick Skyhawk wagon. Bookmark the permalink.